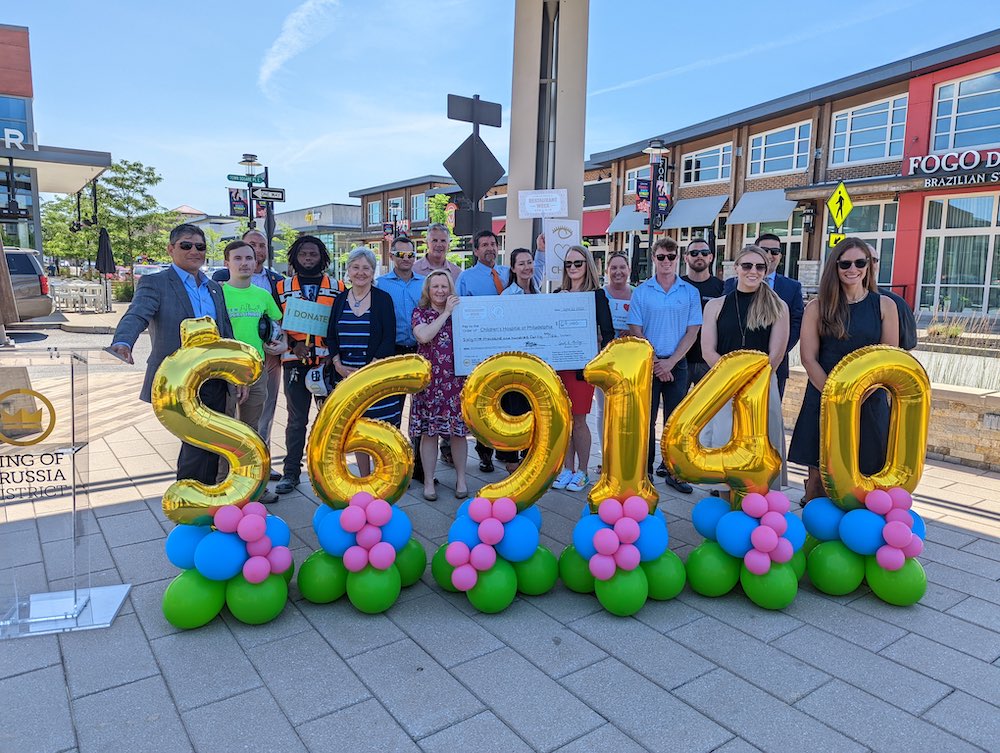 On Wednesday, June 15, King of Prussia District and participating businesses, sponsors and friends gathered to celebrate a successful end to the District’s 8th annual King of Prussia Restaurant Week and KOP Shops for CHOP campaign. Presented by SERVPRO of King of Prussia, the 2022 campaign ran April 4-10 and included 61 businesses, all fundraising for Children’s Hospital of Philadelphia’s (CHOP) King of Prussia Campus: 23 fine dining restaurants, 12 fast casual restaurants, 14 retailers and 12 companies that donated through the campaign’s Community Champions Program.

King of Prussia Restaurant Week began in 2015 after the restaurant community brought the idea to King of Prussia District. From the beginning, the core group of founders felt strongly that the event needed a charitable component to benefit a local organization. Children’s Hospital of Philadelphia’s King of Prussia Specialty Care Center was the perfect fit. Over the years, the event expanded to include other fundraising programs, growing into a true community-wide effort to support CHOP. In 2018, KOP District introduced KOP Shops for CHOP, a retail event that runs concurrently with KOP Restaurant Week. The business community got involved in 2020, when the Community Champions Program rolled out, allowing an opportunity for companies in KOP and beyond to donate through the campaign. In 2021, Upper Merion Area School District joined, hosting a pajama day fundraiser across all schools during KOP Restaurant Week. Each of these facets of the campaign have evolved and grown each year, making a huge impact on the grand total raised for this important regional resource.

On behalf of our sponsors and participating businesses and partners, King of Prussia District is proud to announce that the 2022 KOP Restaurant Week and KOP Shops for CHOP campaign raised a record-breaking $69,140 for Children’s Hospital of Philadelphia’s Middleman Family Pavilion and King of Prussia Specialty Care Center. This brings the grand total to $290,124 over the course of the campaign’s 8 years!

Thank you to all our participating restaurants, retailers and community champions for joining us this year.  Special thanks to the incredible sponsors of KOP Restaurant Week & KOP Shops for CHOP: Presenting Sponsor SERVPRO of King of Prussia; Platinum Sponsors IBEW Local 98, The George Apartments and Westover Companies; Gold Sponsors Valley Forge Tourism and Convention Board and Unruh Turner Burke & Frees; and In-Kind Sponsors Conlin’s Print, King of Prussia Mall and King of Prussia Town Center.